So today, in order to be a good and attentive father, I went to the skate park with my über cool and accomplished skater son to humiliate and injure myself before a live studio audience.

The laughter was uncanned and uncontained. The live studio audience consisted of a couple of ten year old kids, their mothers and I’m sure some sort of video surveillance system so AFV can get a crack at the footage.

Me being me, I set out to convert an 80’s vintage board and trucks onto a 2015 deck and the results were, well… 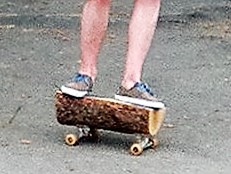 Modern trucks and wheels are shorter and thinner and these (if you’re in the know, you’ll know…) were Independent Trucks and Hosoi Rockets. Tall, wide and old, like me.

I began the “session” impressing my son with a quick 360 that turned into an extemporaneous cartwheel and ended up with me running over my own finger. I’m not entirely sure how I did it because when I finally got back to my hands and knees, my 4 wheeled redneck rocket was nowhere to be seen. I was told that it had headed off the end of a ramp at just under light speed. with its own agenda.

Retrieving my faithful steed and hearing a few snickers from the philistine mommies on the bench, I further impressed my miniature compatriots with a quick roll up the quarter pipe, a 180 and a sudden horizontal quarter flip in which the board suddenly unleashed a burst of nitrous from some hidden tank (I swear I heard a hiss like a huge air vessel was getting ready for a punkin’ chunkin’ shot) and rocketed from under my feet, through the entire skate park and made a hole in one on the frisbee golf course number 7.
The two philistines, caring mothers though they may be, we’re now holding each other up and laughing outright, unable to breathe.

I got slowly to my feet, blinked away the tears of abject shame, gritted my teeth and committed to soldier on, fairly certain that there was internal bleeding involved in my new passion.

I looked about and realized that I was alone in the concrete park. The kids were peeking out from behind the only tree in sight. A three inch wide sapling with no cover whatsoever.

I waved my son back over and he slowly shook his head, apparently so in awe of his dad that he just couldn’t bring himself to share the stage. 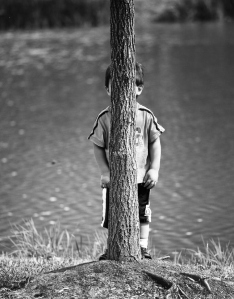 With determined resolve and a furrowed brow I made my way to the lip of the ramp, placed the tail and dropped in.

The board remained glued to the lip and I tumbled *ss over teakettle down the ramp (in remarkable Olympic form I must say).

Assessing the damage, I found I was covered in little bloody patches on places I never even realized I had, a black eye, two digits missing (I found them later) and as I was standing up I spit out a tooth.

It wasn’t even mine.

The philistines were now both on the ground and one had wet herself. As far as I could tell, the other wasn’t breathing but she kept reaching out and slapping her friend on the leg so I knew she was ok.

From beginning to end the whole experience lasted 50 seconds at most.

In retrospect it was an interesting experience and I’m headed back tomorrow.

I have to put up the posters for the missing tooth…

1 thought on “The Skater”