With a heavy heart and a shuffle in my step.

As I arrived at there my heart leaped with the joy of a seven year old child winning the biggest fifty cent stuffed animal out of the bilking crane machine at the mall.

It was completely devoid of another human being.

After a few deliciously solitary laps I noticed one lone woman walk out of the locker room. She was wearing a black & white swim suit and when she turned around I was treated to the sight of a killer whale dorsal fun strapped to her back.

The weirdest/funniest part about it was that the fin was curved just like Shamu at Sea World.

Shamette (as she will be known forevermore) looked vaguely familiar and I realized that the last time I’d seen her she was chewing on the lane rope so I knew that at least a few of the synapses weren’t firing in that blowhole adorned noggin.

She looked at me with what I could only assume was hunger and slipped into the opposite end of the next lane.

Never taking her eyes off of me as we passed, I swear I heard whale noises as I glimpsed her bared teeth.

I could also see her drooling which is incredible when you realize that I was seeing it happen underwater so it was prolific.

Sensing her changing direction and heading into my lane I hastily finish my lap & leaped out of the water like a penguin pursued by a leopard seal. 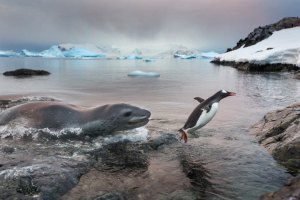 Shamette beached herself directly behind me and without using her hands, wiggled her way back into the pool with a look of regret.

I’m calling the Japanese. I’m sure one of their whaling ships has to be available and I need help.